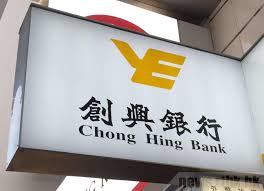 Global Credit Research - 21 Aug 2015
Hong Kong, August 21, 2015 -- Moody's Investors Service has affirmed Chong Hing Bank Limited's baseline credit assessment (BCA)/adjusted BCA at baa2 and long-term and short-term bank deposit ratings at Baa2/P-2. Moody's has also affirmed the bank's foreign currency Basel II-compliant subordinated debt rating at Baa3, foreign currency Basel III-compliant non-cumulative preference share rating at Ba2(hyb), and counterparty risk assessment at Baa1(cr)/P-2(cr). The bank's outlook has been changed to stable from negative.
A list of all affected ratings is available at the end of this press release.
RATINGS RATIONALE
The change in outlook to stable from negative considers the bank's proposed rights issue that significantly improves its capital adequacy. The bank announced on 17 August 2015 that it plans to raise approximately HKD3,708 million before expenses of equity. Yuexiu Enterprises (Holdings) Limited (Yuexiu, unrated), which currently owns 75% of the bank's shares, has agreed to subscribe in full its pro-rata shares.
The rights issue will boost the bank's Common Equity Tier 1 (CET1) capital ratio by approximately 4 percentage points thereby strengthening the bank's loss absorption buffers. Before the rights issue, Chong Hing Bank's capital-related metrics deteriorated following strong balance sheet growth in 2014 and 1H 2015 as we expected post the acquisition. Its CET1 ratio fell to 8.7% at end-June 2015 from 10.8% at end-2013 and 9.6% at end-2014. The pressure on capital adequacy will be mitigated by the proposed rights issue.
The change in outlook and affirmation of ratings also considers that the bank has maintained sound asset quality metrics in the past few years. It reported an impaired loan ratio of 0.05% at end-June 2015, which compares favorably with similarly rated regional peers.
We expect lending to mainland entities will continue to increase but at a measured pace. Lending to mainland companies has grown faster since 2014 since the bank's takeover by Yuexiu, but from a low base. At end-June 2015, lending to mainland customers accounted for 7.2% of gross loans. Nearly half of the bank's non-bank mainland exposures are to central or local government-owned entities which typically entail lower credit risks than lending to smaller private companies. Its impaired loan ratio for mainland lending remains low at 0.05% at end-June 2015 but because these loans are still unseasoned, the sustainability of their asset quality will be tested in a slowing economic environment in China.
Profitability has also improved following the acquisition by Yuexiu in February 2014. Excluding the one-off gains on property sales, it reported an annualized return on assets of 0.8% in 2014 and 1.2% in 1H 2015, up from 0.7% in 2013.
Chong Hing Bank maintains a sound liquidity profile, with a loan-to-deposit ratio consistently below 70%. Nevertheless, the bank's loan-to-deposit ratio has trended up to 67.7% at end-June 2015, from 62.0% at end-2013. Meanwhile, the bank has a limited reliance on wholesale funding. Customer deposits accounted for 88.1% of total liabilities at end-June 2015.
WHAT COULD CHANGE THE RATING -- UP
The bank's rating may be upgraded if it can maintain consistently stronger capitalization following the proposed rights issue and good asset quality while improving its franchise and market position.
We may also consider an upgrade of the bank's deposit ratings if we judge that the increasing strategic importance of the bank to the Guangzhou government through Yuexiu merits consideration of including support in the ratings.
WHAT COULD CHANGE THE RATING - DOWN
Chong Hing Bank's ratings could be downgraded if its balance sheet growth materially outpaces its peers and the bank adopts a more aggressive risk-taking approach.
The bank's standalone assessment could be adjusted lower if its asset quality metrics deteriorate, with impaired loans exceeding 2% of gross loans, or if its capital adequacy weakens with its tangible common equity/RWA ratio falling below 10.5%.
In addition, a rapid increase in its Mainland exposures will render the bank more vulnerable to adverse economic developments in China, and could trigger a downward adjustment to its standalone assessment.
The following ratings are affirmed:
Local currency and foreign currency long-term bank deposits ratings: Baa2
Local currency and foreign currency short-term bank deposits ratings: P-2
Foreign currency Basel II-compliant subordinated debt rating: Baa3
Foreign currency Basel III-compliant non-cumulative preference shares rating: Ba2(hyb)
Counterparty risk assessments: Baa1(cr)/P-2(cr)
Baseline credit assessment (BCA) and Adjusted BCA: baa2
PRINCIPAL METHODOLOGY
The principal methodology used in these ratings was Banks published in March 2015. Please see the Credit Policy page on www.moodys.com for a copy of this methodology.
Chong Hing Bank Limited is headquartered in Hong Kong and reported total assets of HKD116 billion at end-June 2015.
發佈者： 天路客 於 15:58 3 則留言: